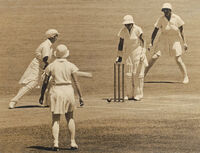 Women's Test cricket is the longest format of women's cricket and is the gender equivalent to men's Test cricket. Matches comprise four-innings and are held over a maximum of four days between two of the leading cricketing nations. The rules governing the format differ little from those for the men's game, with differences generally being technicalities surrounding umpiring and pitch size. Far fewer women's Test matches are played each year than women's One Day Internationals, with the international calendar revolving around the shorter format of the game. The first women's Test match was played by England women and Australia women in December 1934, a three-day contest held in Brisbane which England won by nine wickets.

The primary, and most noticeable, difference from the men's game is that women's Test matches are played over four days, rather than five. However, the players are expected to fit more overs in per hour in the women's game than the men's: 17 as opposed to 15, and so a full day's play in a women's Test match should include 100 overs, rather than 90. The cricket field has smaller dimensions; the boundaries must be between 55 and 70 yards (50.29 and 64.01 m), in contrast to the 65 to 90 yards (59.44 to 82.30 m) required in men's Tests. As well as playing on a smaller field, the women use a smaller and lighter ball than their male counterparts; the Laws of cricket dictate that women should use a ball that is between 4 15⁄16 and ​5 5⁄16 ounces (139.98 and 150.61 grams); which could be up to 13⁄16 ounces (23.03 grams) lighter than the ball used by the men. The Umpire Decision Review System (UDRS) is not available in women's Test matches, though umpires are permitted to ask the third umpire to check television replays in certain cases.

In all, ten national women's teams have competed in Test cricket. The England team's tour of Australia and New Zealand in the 1934–35 season established the first three sides, and it is those three teams that have competed in Test cricket most frequently; each having played at least 45 matches. South Africa were the next side to play the format, contesting their first match in 1960. However, due in part to their exclusion from international sport due to the nation's apartheid policy, they have only played in eleven Test matches, less than both India and the West Indies. Four sides — Pakistan, Ireland, the Netherlands and Sri Lanka — have all competed in fewer than five Test matches.

Due to the infrequent playing of women's Test cricket outside of Australia, England and New Zealand, cumulative records, such as the most runs during a career, are dominated by players from those three nations. England's Jan Brittin has scored the most runs during her career, totalling 1,935 during her 27 matches, and 18 of the top twenty players come from either Australia, England or New Zealand. The Australian batsman Denise Annetts, who is 15th on that list, has the highest batting average, 81.90, from her ten matches. Annetts was also involved in the largest partnership in women's Test cricket, sharing a stand of 309 runs with Lindsay Reeler in 1987. Seven women have scored double centuries in Test cricket; the highest of these was the 242 runs scored by Pakistan's Kiran Baluch against the West Indies in 2004.

Mary Duggan, who played for England between 1949 and 1963 is the leading wicket-taker in women's Test cricket, claiming 77 wickets from 17 matches. The next most prolific bowler is Australia's Betty Wilson, who claimed her 68 wickets at the lowest bowling average, 11.80 and the first hat-trick in Women's Test cricket. Both of the players with the best bowling figures, in an innings and in a match, are from the Indian subcontinent; India's Neetu David holds the record for the best figures in an innings, having taken eight second innings wickets against England in 1995, while Pakistan's Shaiza Khan took thirteen wickets in a match against the West Indies in 2004.

Amongst wicket-keepers, Christina Matthews has taken the most dismissals in her career, accumulating 46 catches and 12 stumpings during her 20 matches for Australia. Lisa Nye holds the record for the most dismissals in a single innings, having been responsible for eight of the ten wickets for England against New Zealand in 1992. Only two players have achieved the all-rounders double of scoring a century and taking ten wickets in the same match; Betty Wilson did it against England in 1958, while Enid Bakewell managed it for England against the West Indies in 1979. Wilson's performance was the first time such a feat had been achieved in Men's or Women's Tests and also included the first hat-trick in Women's Tests.

Community content is available under CC-BY-SA unless otherwise noted.